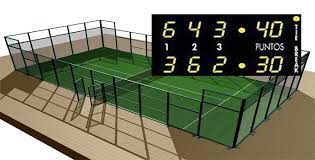 We all know or find out very early on that the padel score is the same as the tennis score.
But once we discover this, sooner or later we all wonder why it is counted this way instead of a more “normal” progression like 1, 2,3.

We read some information online, our curiosity got really high… and we discovered that, in truth, maybe nobody really knows why this numbering was introduced!
In fact, there are several versions, some really picturesque, but we have not found any certain reference that explains the origin of this count. We report them, everyone can choose the one he likes best!

The first theories go back as far as the Middle Ages, long before the birth of the sport of tennis, from which padel inherited the score (dating back to 1887 in conjunction with the first tournament played at Wimbledon).

1) the theory of hunts and the rhyme.

According to what has been handed down, at that time the points would have been counted according to the “hunts”, or rather the marks made on the playing field every time the ball stopped: 15 marks formed one point, 30 two and 45 made 3.
According to this theory, 45 became 40 because of an easier diction, which recalled among other things a French nursery rhyme that was called “quinze, trente e quarante”.

2) The theory of gold money

More or less of the same period is the version that we tell you now. It must be said that it is less credited than the previous one, but it seems that for each point were put up for grabs some coins, in fact 15 soldi that corresponded to a gold money. Hence the decision to keep this unit of measure.

This theory refers instead to the presence of two clocks used to mark the points. In practice, the hands were moved from quarter of an hour to quarter of an hour until they completed the turn reaching 60, which corresponded to the victory of the game.
Besides the rhyme, there are also two other versions that explain the passage from 45 to 40. The first version, refers exclusively to the need to signal the advantages in some way (to win the game were needed even then two points of detachment from the opponent). So they may have opted for 40, which allowed the advantage to be placed on 45.
The second is more picturesque and also has a flaw…. It seems that the reporting of points was entrusted to children, and most of them could not comfortably reach 45, so to facilitate the operation they might have chosen to reach 40. The flaw in this explanation is evident… because if the children really had problems reaching 45… how could they reach 60 at the close of the game?

Is the bumper useful? How to put it on, how to take it off?