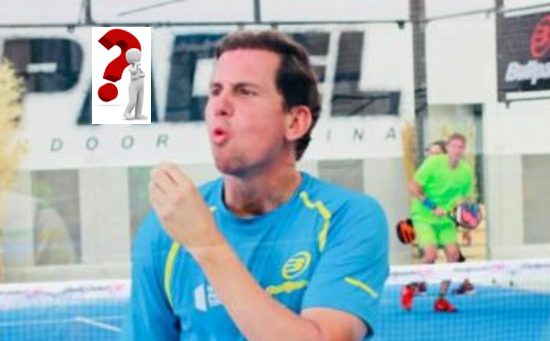 For those who are passionate about padel recently there are several curiosities to know about this sport, let’s see today some related to our blade or paddle

The PRO season has restarted and soon will start the new FIP circuit that will probably feed in these months the entrance of new fanatics of this fantastic sport.

With this, there will be new players who will ask questions about the rules (in the groups we often read questions from newbies) and so we thought to get into the merits of the paddles.

Not so much about the quality or effectiveness, we’ll do other articles for that… as much as how you can and cannot use them during a point.

Have we intrigued you enough? then read on….

Now, we know that there are shovels of different shapes, materials, weights and that by relating the different characteristics we have shovels more effective in attack and others more suitable for those who defend with prevalence.

The focus of this article, however, will be on two useful questions regardless of the type of shovel you choose.

The first is…can I throw the shovel to hit the ball?
The second is… can I change the hand I’m holding the blade with?

Let’s start in order: can I hit the ball by releasing the blade from my hand?

This is a doubt that may assail us, in all those situations where we are just a few inches away from the ball and all we need to do is let go of the blade to hit back.

In this situation, although the temptation is high, we are helped by the FIT rules which are very clear.
Rule 13, paragraph K, specifies that a point is lost “if he hits the ball by throwing it against his racket” and this leaves no doubt of interpretation.

This means that at the exact moment of impact with the ball, the blade must be correctly gripped to validate the shot. Not necessarily with all five fingers, but it must be gripped.

And now the second curiosity, which is “Can I change my playing hand?”

This is where the discourse gets a bit twisted, while still referring to the regulations… because in this case not all regulations are the same.
The FIP states:
“The shovel must have a rope or a non-elastic wrist strap to protect against accidents. Its use will be mandatory. This cord must have a maximum length of 35 centimeters.”

The SPANISH regulation, quite in line with the FIP, says that: “It should have a cord or a wrist strap to protect itself from accidents. Its use will be mandatory. This cord must have a maximum length of 35 centimeters.”
So we already have a regulation requirement that restricts passing from one hand to the other.

But, if during the game, I keep the lanyard on the same wrist and, in a shot, I want to use the other hand (obviously with limits of movement because, being the lanyard 35cm long, I will find myself managing my arms in a parallel movement), can I do it?
The rules in this case do not give any specifications whatsoever, so if the lanyard is not moved from one wrist to the other and instead remains in its original location at the beginning of the exchange… then the point is valid.

And now the curiosity.

The ARGENTINE regulations differ from the FIP and SPANISH regulations because regarding the string it says:

In other words, in Argentina it is specifically mentioned:
Beware though, unless you go to play in ARGENTINA, in tournaments that are subject to Argentine rules you will never be able to take advantage of this regulation.

In fact, in no international or Spanish competition will it be possible to change the paddle and we are always bound to keep the lanyard firmly attached to the wrist.

The Importance of Internal Insoles for Padel