The 2020 season has just ended and we’re already looking forward to the 2021 season with so many couple changes.
The 2021 will be a new opportunity to see in action the best padels on the planet.
Padel masters who will also try to increase their legend by extending their palmares.

From 2013 to 2020 there have been 126 tournaments between Masters and Open (with 252 victorious players being pairs) and the nation with the highest number of winners is Argentina with 161 (with 12 different athletes), followed by Brazil with 47 tournaments (all won by Pablo Lima) and Spain with 44 victories.

A fight to be the biggest star in the history of a circuit that will live its ninth year. 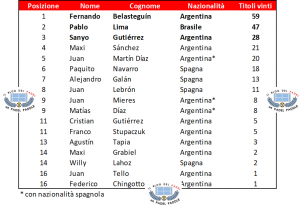 Leading this list of legends is the greatest of all time, Fernando Belasteguín, who is also the player with the most WPT titles since the circuit began.
A figure, 59, which already last year seemed to be able to be approached by Pablo Lima (47) and Sanyo Gutierrez (28) but which actually saw more tournaments won by the legendary Bela than the other two players on the virtual podium of this all-time ranking.
This year in the virtual ranking of the multiple champions there are two new entries the Argentine couple Juan Tello and Federico Chingotto (winners at the Las Rozas Open).
Ale Galan and Juan Lebron made a leap forward and with their 6 titles won in 2020 they moved respectively from 9th to 7th and from 10th to 8th place, overtaking Juan Mieres and Matias Diaz.
Franco Stupaczuk reaches 11th place Cristian Gutierrez while Agustin Tapia with the two victories of the Sardinia Open and the Menorca Master Final overcomes Maxi Grabiel and Willy Lahoz placing himself 13th.

What new names will be added to this select club in 2021?
What will be the fight to be among the top of this exclusive club?

Happy World Padel Tour to all