In 1995 in Italy the 1st edition of the European Padel Championships was held, called Mediterranean Cup.
The tournament took place from 6 to 9 July in Lido di Savio (Province of Ravenna) at the AS Beach Paddle Club.

For Italy, the organization of the first European Championship was a great success, since Padel had a recent history in the peninsula (1991) as well as our Federation.
The Italian media did not give a great result to the event, except for the local ones of Emilia Romagna and Veneto, instead the Spanish specialized media on Padel praised the management of the Italian event. 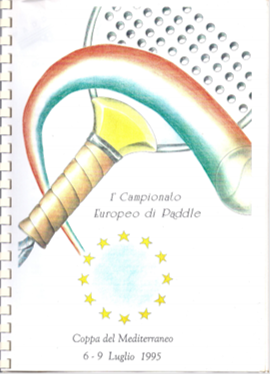 The organizing committee of the tournament had a general coordinator Daniel Patti (President of the Italian Paddle Game Federation) and a tournament director Mauro Zanzi (President of AS Beach Paddle) and the competition official Stefano Bacchi.

The system of competition of the Mediterranean Cup for national representatives, to which were enrolled the nations of Italy, Spain and France, provided that each country had to be represented by a minimum of four to a maximum of 7 players, a captain and a manager, it was played with a round of three Italian style.

The Tournament was won by Spain in both the men’s and women’s tournaments also because they brought their best players to the championship. 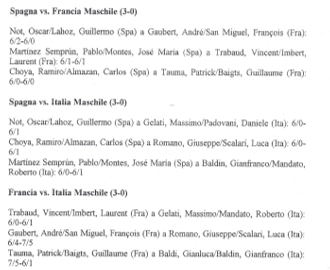 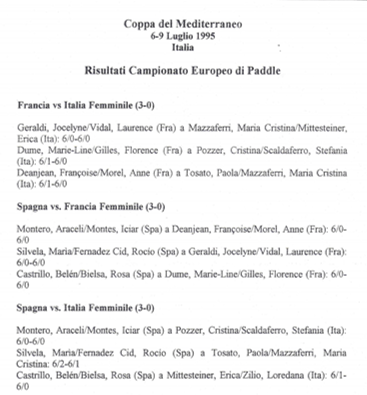 Regarding the male Open each European country had the right to enroll two couples (at that time the European countries where Paddle was practiced were Spain, France, Italy, Great Britain, Belgium, Ireland, Austria and San Marino) plus the organizers could invite players from other nations to participate and to complete the picture the invitation was addressed to Italian players.
At the end 16 couples of 7 different nations (Italy, Spain, France, San Marino, Argentina, USA and Austria) participated with direct elimination starting from the round of 16. 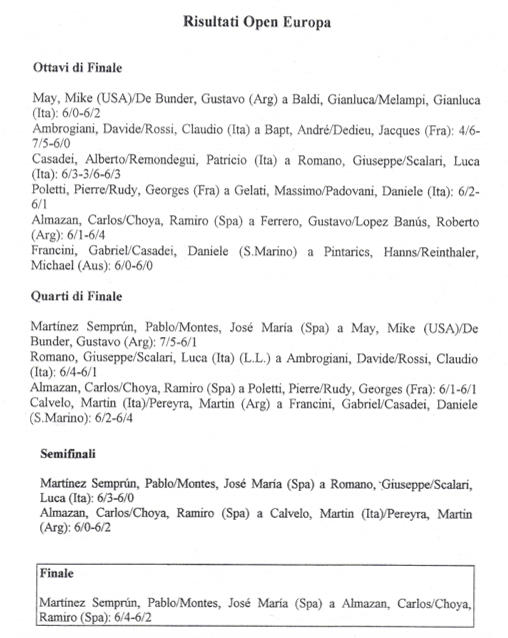 Photo in which the Daniel Patti delivers to the President of the Spanish Federation Gongora the trophy: 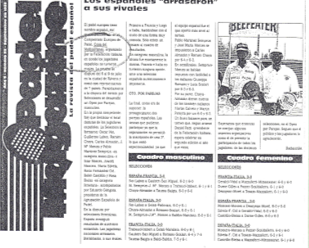 The three most spectacular points of the Vigo Open