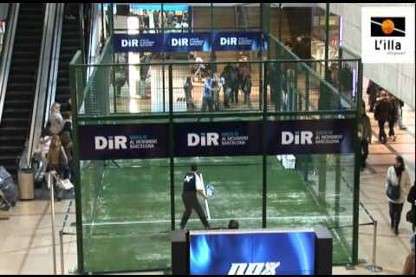 In 2010 was organized in Barcelona at one of the largest shopping malls in Spain, L’Illa Diagonal, the single tournament of Padel with the largest number of members, of “non-paying spectators” lasting more than two weeks.

As Andrea Balducci (PadelBarcellona.it), the first Italian player in the history of Padel, tells us, in 2010 a single padel court was installed in the L’Illa Diagonal Shopping Center, a huge center divided into several floors, several hundred stores and a daily attendance of thousands of people.
The single court was installed to launch a chain of DIR gyms and promote a club within a gym in the upper part of Barcelona.
They decided to organize a tournament open to all the inhabitants of the city, the enrollments were so many (as Andrea says “it was a barbaric thing!”), infinite rounds and the “travelling” spectators tens of thousands of people that between a shop and another stopped to see the tournament.

Here a short video of that event:

In those years, the Spanish Federation had studied single padel and had made tests with players and masters in order to make single padel officially a sport.
In the end, however, this project was no longer carried out for business reasons, probably because the clubs were against it because it would have reduced their profit margin by 50%.
In Barcelona there are more than 30 individual fields but there are no specific clubs as these fields are installed or where there is no other space to make a traditional field or for specific training but always within clubs with traditional fields.