The 2021 season has just ended and we’re already looking forward to the 2022 season with so many couple changes.
The 2022 will be a new opportunity to see the best padels on the planet in action.
Padel masters who will also try to increase their legend by extending their palmares.

From 2013 to 2021 145 tournaments have been played between Masters and Open (with 290 victorious players being pairs) and the nation with the highest number of winners is Argentina with 178 (with 14 different athletes), followed by Brazil with 49 tournaments (all won by Pablo Lima) and Spain with 63 victories.

A fight to be the biggest star in the history of a circuit that will live its tenth year. 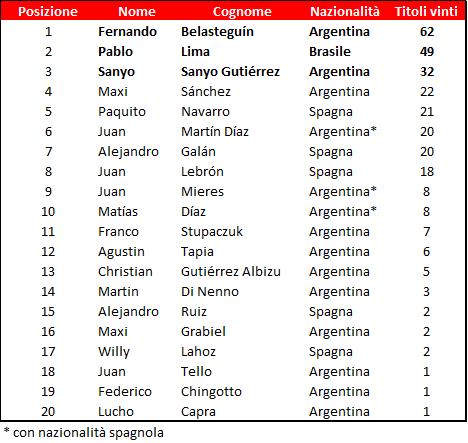 Guide this list of legends, the greatest of all time, Fernando Belasteguin, who is also the player with the most WPT titles since the beginning of the circuit.
A figure that compared to last year has increased by 3 trophies from Belasteguin all won at the beginning of the season with his partner Sanyo, in second place the Brazilian Pablo Lima with 2 victories this year in the company of Tapia has brought to 49 and follow Sanyo Gutierrez this year took home 4 titles for a total of 32 tournaments won WPT.
This year in the virtual ranking of the champions there are three new entries, the Argentine Lucho Capra with a tournament won, the Spaniard Alex Ruiz with 2 won and another Argentine Martin di Nenno with 3 trophies.
Leap forward of Ale Galan and Juan Lebron that with the 7 titles won in 2021 bring to 20 titles won for Galan and 18 for Juan.

What new names will be added to this select club in 2022?
What will be the fight to be among the top of this exclusive club?

Happy World Padel Tour to all

Mexico Open: The three most spectacular recoveries of the Tournament